Back to links
Number Games (general)

Coming of age numbers: 16, 18, 21
Growing up in america (and much of the world), the numbers 16, 18, and 21 are all very important 'coming of age' numbers. Sixteen-candles. Driver's liscense. 18 you can smoke, and go to war, and be an individual. 21 you can purchase alcohol (weed too, today). It may surprise you, the reason these numbers are important is because you are surrounded by a bunch of people who are SHhhhh playing a secret game. One of the unspoken rules of the game is that numbers are often made up on the spot, but numbers have meanings. Imagine a group of friends get together and have a joke with one another that whenever they say 17 of something they are telling a big fib. "I caught 17 snipe earlier today". It's that exact sort of logic. A group of people who agree to secretly play a game where numbers matter. And many people are just left out in the dark, not even knowing that people really care about numbers. Getting to the point:

It just so happens, that the numbers 16, 18, and 21, specifically, have very important gematria properties to those in the secret club. Gematria is basically the study of turning words into numbers, and it is very historical and biblical and still very much in use today. This actually applies to the first number.

16, or six-teen. If written out, the number equals 33 in pythagorean gematria, and this is a big deal (it's not common among numbers). Another, potentially important quality of the number 16 is that it's the very first number that reduces to 7 (since 1+6 is 7) and 7 is a very important number. Before I get on to the next one, it's interesting to note that these three coming-of-age dates are very close to one another. Wouldn't it make more sense to just allow all of this stuff at 20 and call it a day? These years with how quickly time is moving there is hardly much of a difference between a 16 year old and an 18 year old.

18 is 6 + 6 + 6 which has obvious appeal to the satanic crowd which runs this place. Similar to 16, 18 also reduces to an important number, 9. Remember that beatles thing, revolution number 9? These people put great importance on numbers. I don't suggest you dive into studying occult gematria, the message is to pay attention and understand the M.O. of your enemy. If you're new, in general, 3, 6, 9 are big numbers, and 7, and then multiples of 11. "They" like mirror images, plaindromes, and just like they're obsessed with word games, punns, etc, they play number games. I'll have to expand on this later, but one idea of 'number games': 23 is a way to think of 33, since 23 -> two threes -> 33.

21 is important because it's the jackpot number, tripple sevens. In general, all the multiples of seven are favored numbers, but 21 in particular is an important number because it is 7 7 7. Repeating things 'adds power' in their mind. Like an amplification of the number 7, three times. Think of how when people want to emphesize something they might repeat it three times. It's a known meme for the media to do things in threes. Awkward political speeches love to do this, because they think they're wizards casting spells, and saying it three times is a type of magic (I'm not joking, many of them really think theyre witches and wizards, thats why they remain obsessed with harry potter their whole life). If a bunch of people decide together to put a bunch of importance in numbers (and keep it secret), it becomes a sort of game / hidden language. And similar to a language, context is important, there's likely different 'dialects', different people might have slightly different meanings of the same thing. I don't try to ever talk about signs or symbols as if I know exactly what they mean, because often times I don't think that they know exactly what they mean. They've just decided together that they will secretly speak using symbols, and it kinda works up from there into the whole orange 33 thing. It becomes an absurd inside joke.

I guess one thing to note. Part of the speaking in symbols thing, is that everything has -some- meaning. If you decide that you're going to express things symbolically using color, then all the different colors are going to get meanings attached to them. It's just that some things take on stronger meanings, naturally. That's why they are so orange obsessed, but then something like star-bucks might choose green to match the bucks in their name and the fact they'll make lots of green money. In a similar way, all the numbers around 16-21 will have some sort of signifigance, but I do personally believe that 16-18-21 are favored for the reasons given above. 
Calculator Number Games: 1800-666
There were quite a few calculator number games (lots of immature ones, 8008135) but one that seems almost too 'coincidental' is the 1800-666 connection. This calculator trick involves inverting the calculator at the end, and inversion is one of the big unspoken 'rules' or tricks, or things 'they like', however you want to think of it. On topic, lots of commertial type phone numbers begin with 1800, so it makes sense to consider the satanic phone number that begins 1800-666. If you do the math, on a calulator, the output reads 1134. Holding this number upside down reads out hEll. 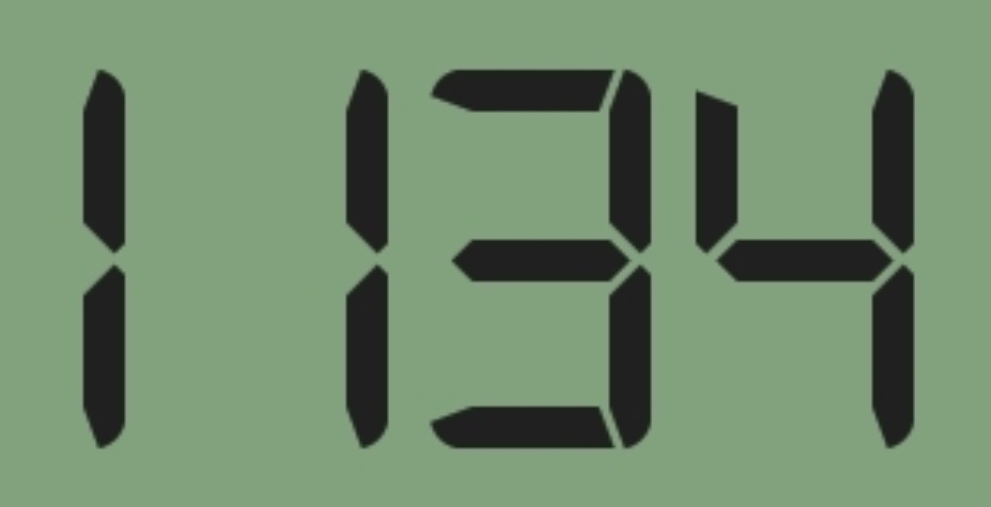