Home
Back to links
Viral Marketing 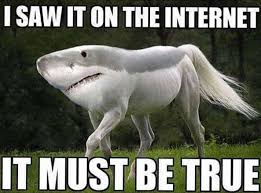 If you didnt know, ₪ is the symbol for the Israeli New Shekel and kinda looks like this

This page is a list of viral marketing campaigns. Viral Marketing is when a company produces a peice of advertising but then tries to pass it off as something it's not, and then force it to 'go viral'. I'd say more often than not they use bots and shill sockpuppet accounts to make their ads 'go viral'. Viral marketing fascinates me because the evils of advertising have always fascinated me. One example being the old stories of subliminal messages that would put into various media, a flashing image, or frequency we cannot hear. The 'experts' telling us "oh but don't worry it didnt work (winkey face)". The fact that companies get away with this kind of dirty advertising, and most people have no idea it exists, just shows you how this world is evil and run by dirty people. I am also reminded of how most people eventually learn that anything advertised as "free" is NOT free, and that's just the way this earth works right now. I just think things like this should be common knowledge. This is something I run into every once in a while. If you're on reddit you're bound to run into this daily: things that are straight up advertisements that are disguised as a 'regular person' posting. Feel free to contact me if you have good examples.


Fushigi
https://www.youtube.com/watch?v=myIR__htBgc&feature=youtu.be
Thank you J for reminding me of these things! Lots of scam products are actually selling you "hidden-knowledge" rather than the product itself. Lots of gypsie type individuals sell trinkets like this (you've seen the magic 'dancing' puppets right?) so the tradition probably goes to the begining of time. For one easy payment of $19.99 you can buy this "magic gravity ball". Just like gravity, the magic is, it doesn't exist. There is aboslutely nothing 'magic' or special about the fushigi ball. It is a ball made of acrylic (plastic). You're paying for a basic introduction into 'contact juggling'. This is how magic shops work, too. You're mostly paying for the 'hidden knowledge' of how the 'magic trick' works; the junky plastic parts that come with the instructions probably break within a week. Often times these skills are not easy and 99% (or more) people who buy the product will give up, especially after they find out they were deceived into purchasing cheap plastic!
This is seriously like selling a paintbrush and claiming the paintbrush is special in some way. Then, using flashy production values, actors, and professional artists, you pretend like the product is somehow making amazing paintings really easily. When people order the product it turns out that it's a regular (cheaply made) paintbrush and a booklet on beginer painting techniques.
Here are some photos. 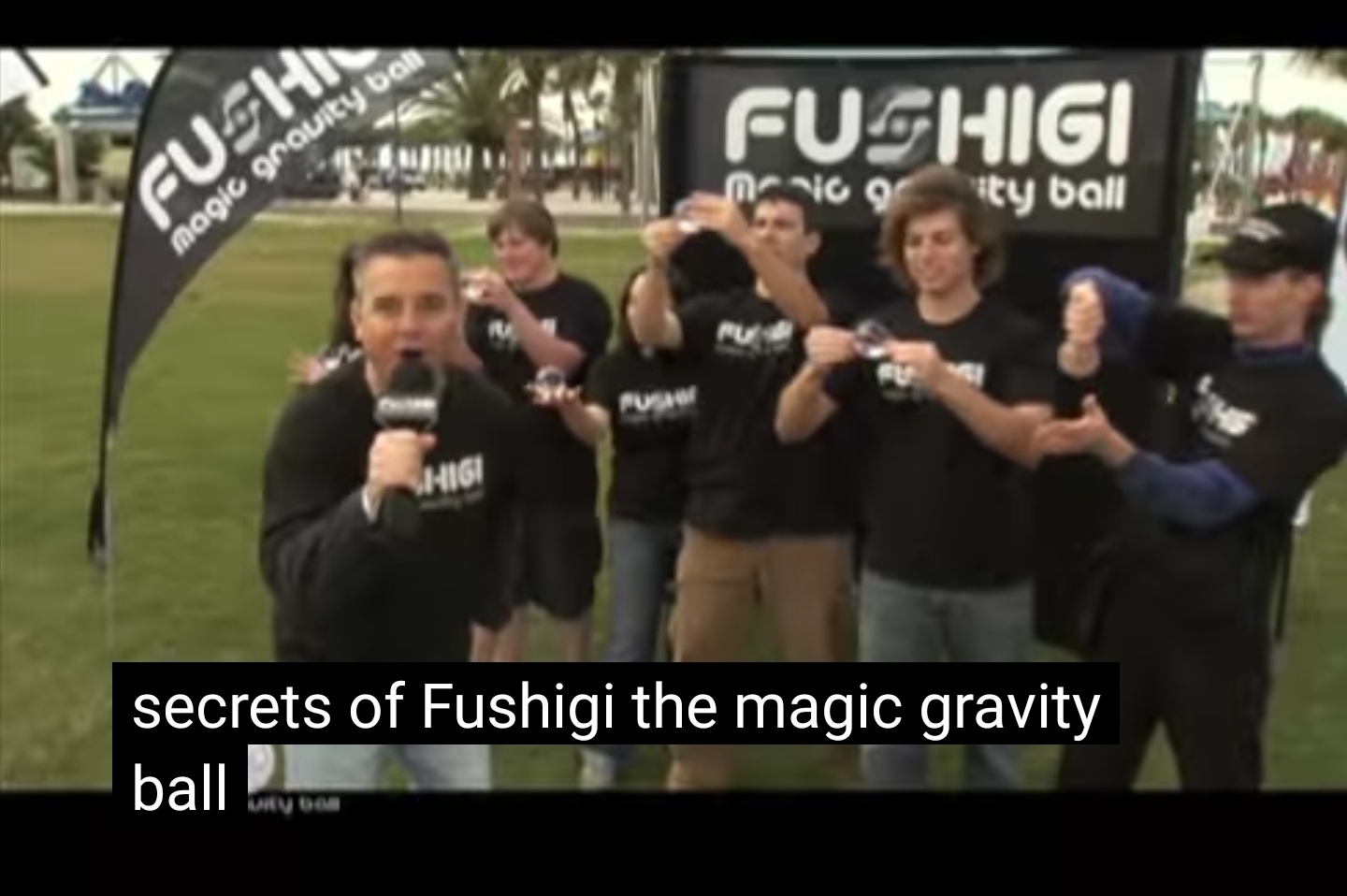 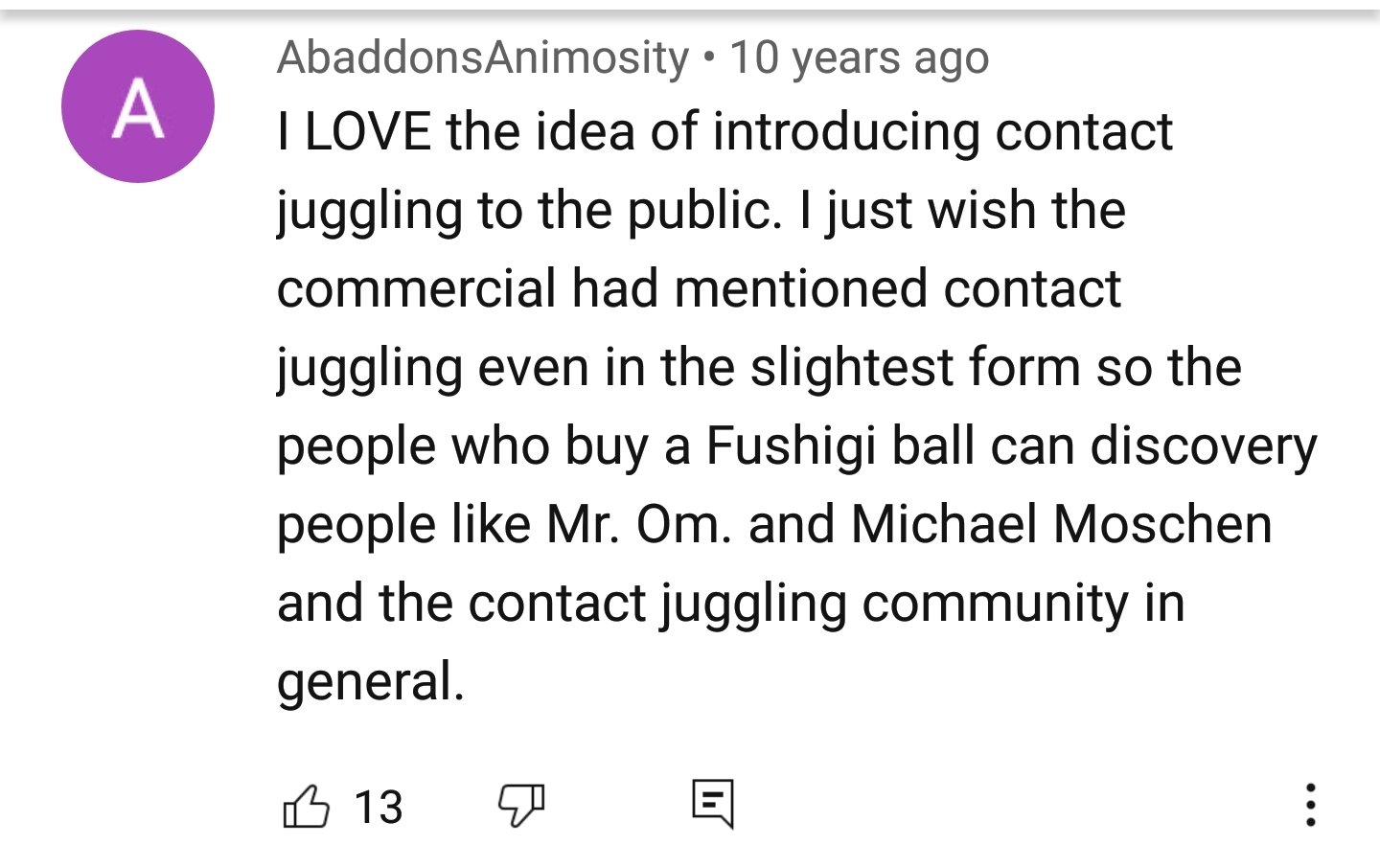 they hid the true nature of the product 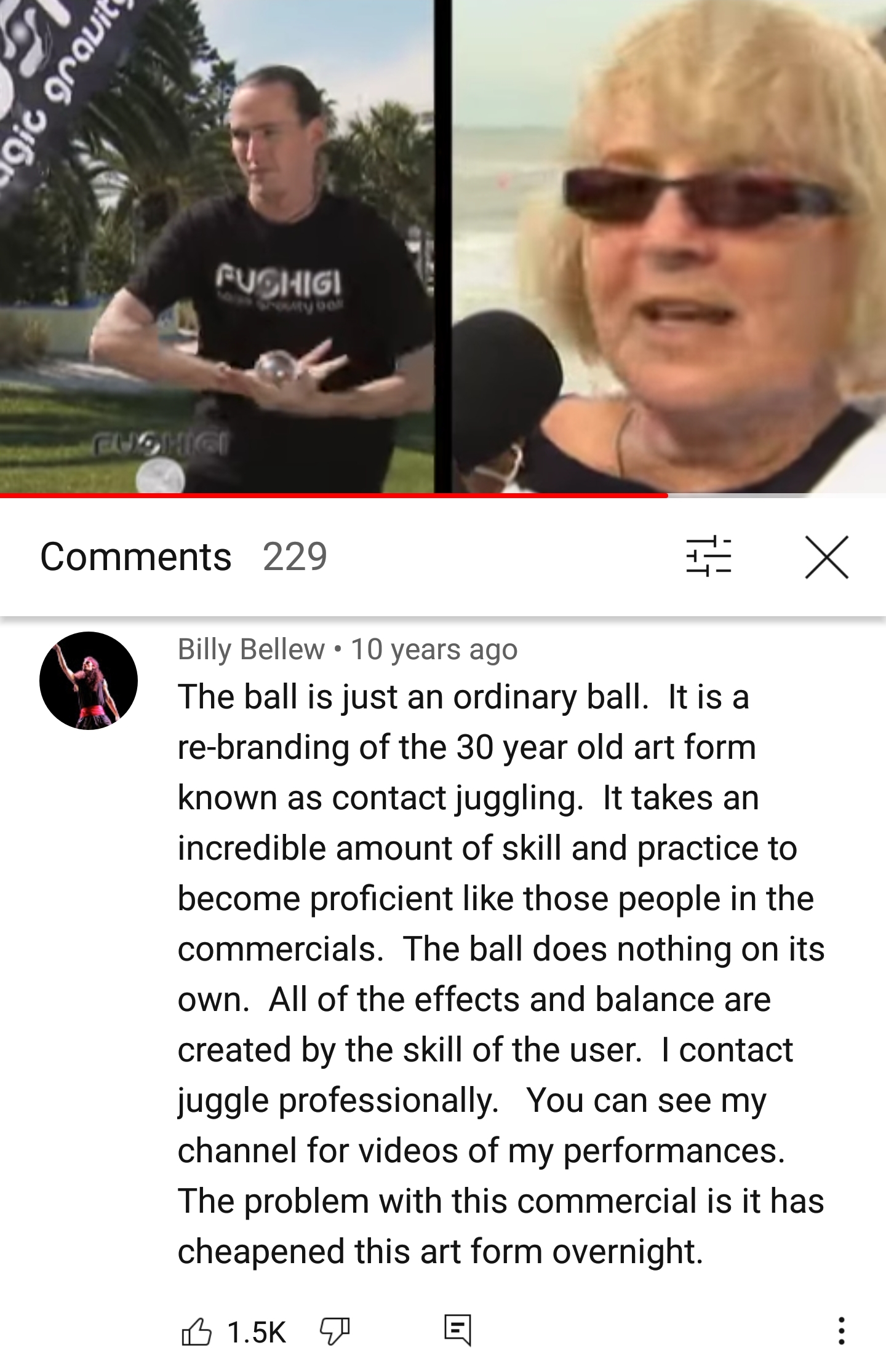 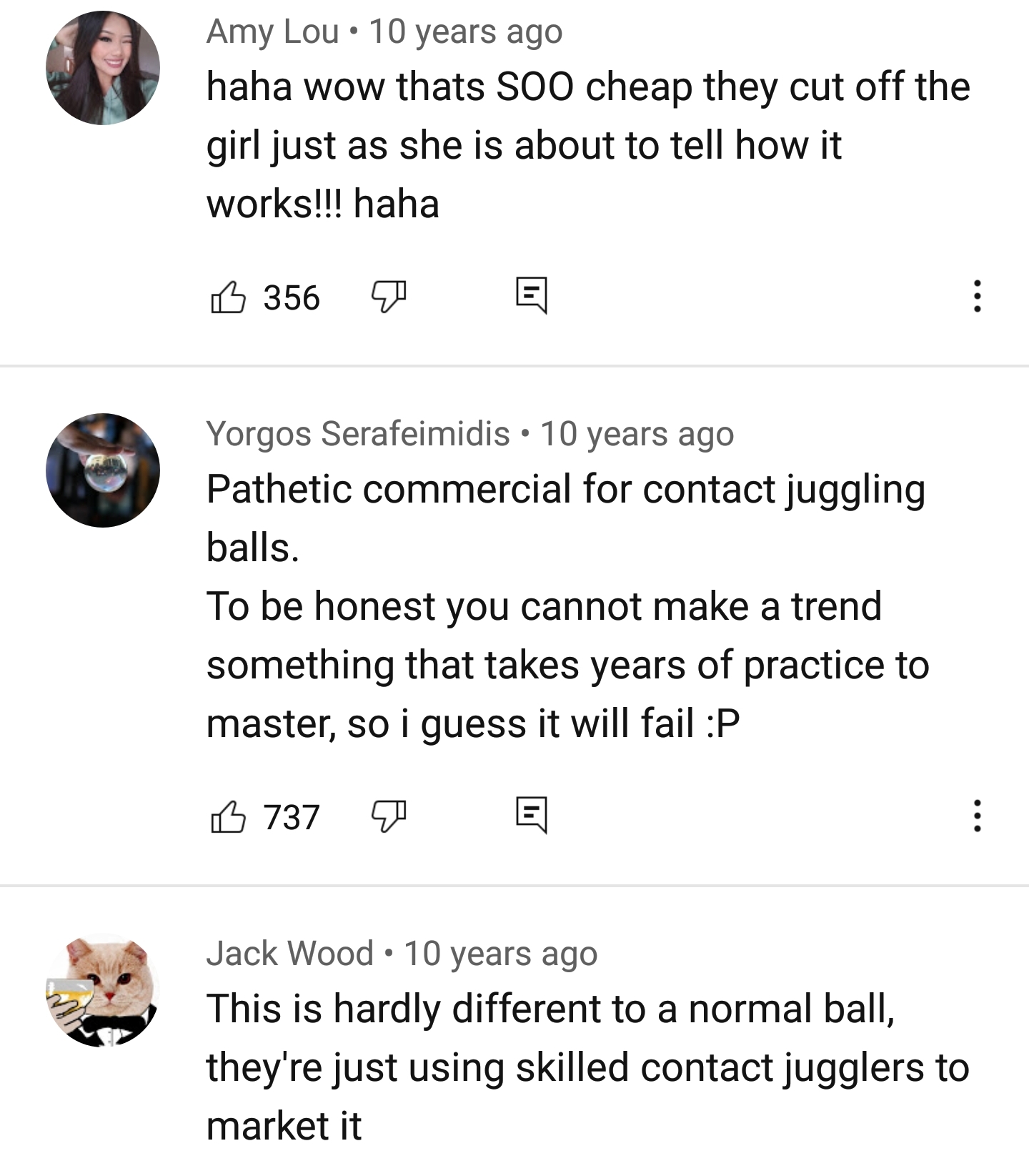 MyPillow
MyPillow = 33 in chaldean, and pillow = 33 in pythagorean. The following image was from "MyPillow" reviews on amazon. Notice how in the photo this 'every day person' is showing the triad claw. These people are so childish (with the handsigns) until the day they die!
I thought it was bizarre how the review is clearly a very very negative review but it has a 5 star rating. The mypillow topic is rather interesting because it's a sham product with TONS of money put into advertising. Almost reminds me of the "no-no" (that name! warning people! mocking! haha) electric hair removal product. The mypillow is nothing but a crazy made up back story for a fake persona, and a shit product. There is absolutely nothing revolutionary about the product whatsoever; it's a scam. It has always been fascinating to me that things like this are still so prevelent in society. The pillow is shredded low quality foam. All of the effort goes into coming up with this insane character who pretends he dreamed of the product (he also allegedly was a crack addict, and 'staying up for weeks' etc etc the story goes on and on, ex bar owner, pig farmer, they go all out with these things), it's just an insane made up story to get people to spend 60 dollars on a bunk product. 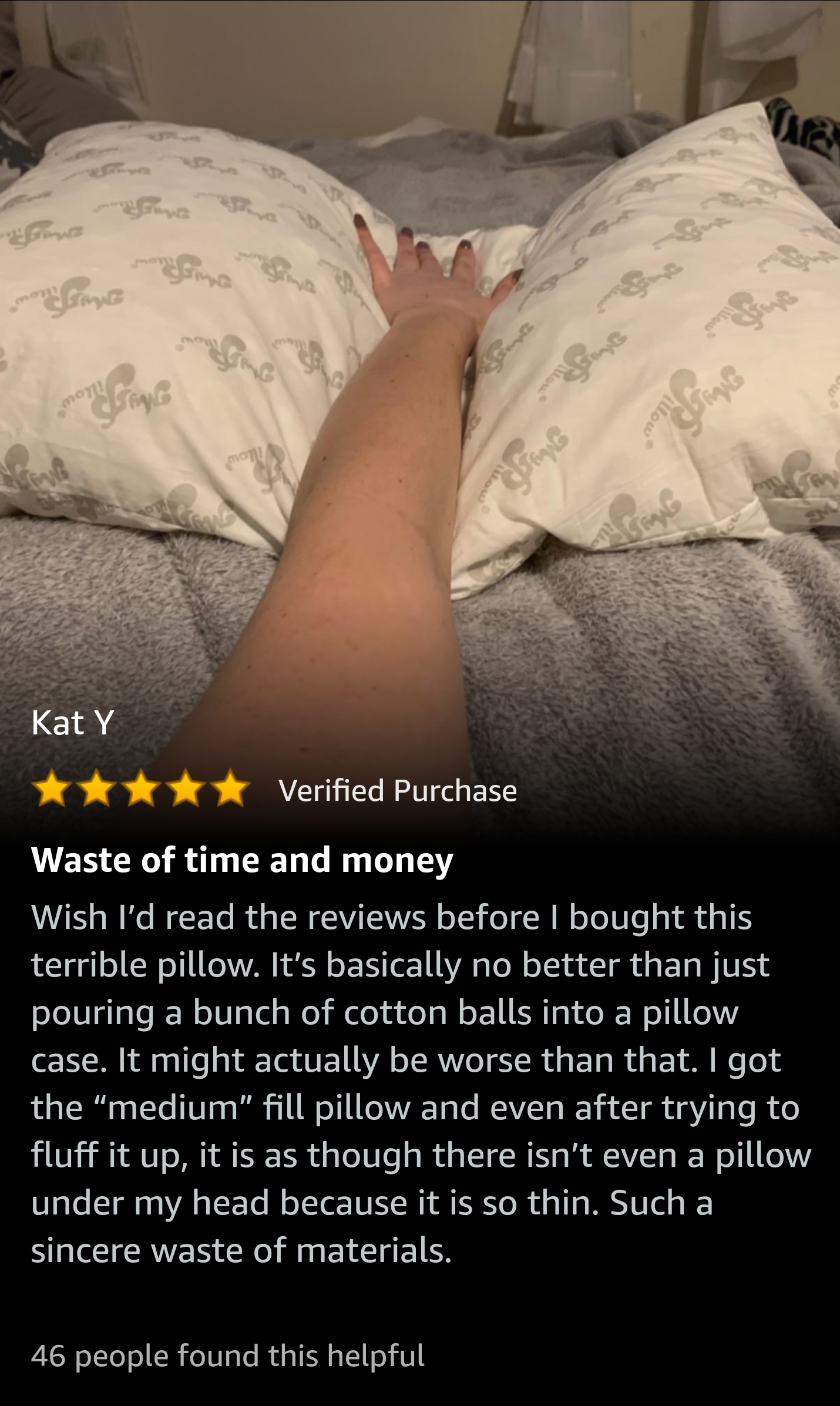 First, did you know that 'beer' was the name of a well in the bible? I think that's probably why they took that name and gave it to one of the most popular drinks. They like to take things from the bible and then make something ultra famous with that same name, so it's like the first name 'gets erased'. (like the beatles song 'hey jude' makes people not think of the book of the bible called Jude, which is a great book btw)

People in the comments were mentioning that many of the beer bottles were full with the lid on. What I noticed was that all the cases had the same design on them and looked pristine. Sure it was junky, but the boxes were all bright blue and the same design. If someone was an alcoholic and drinking over a longer period of time, the cases wouldn't all look in the same condition with the same design on it. Big brands constantly change their designs. To me it just looked like someone had video of an apartment and used post production to CGI in a bunch of generic beer brand.

A big red flag is the length of the video. The shorter the video the more suspicious. 23 seconds of fake footage is easier to fake than a one hour tour of a junked home, for instance. Something I see with most faked videos is they are well under a minute and often have a lot of cinematic cuts (not in this case, but they often do) and you will never see the raw footage. If the video is 33 seconds long, forget about it.